Sometimes characters come to life easily, but sometimes it’s a little trickier to coax them into existence or figure out what makes them tick. The little details can add a lot of depth, and the details you didn’t realize were there can end up shaping the whole character. This pack can get you started building a character or be used to further flesh out an existing character.

Included is a list of 30 prompts with questions about your witch’s practice and lifestyle, as well as a few tables to pick details from or you can roll dice to choose. The prompts and tables are specifically witch related, though can also be applicable for witch-adjacent characters such as druids or mages. A lot of the prompts and options are general enough to work across a wide range of settings, from historical to modern to sci-fi.

There are also 8 ready made characters are for you to use in your own TTRPG games, stories, or cosplays. The rest of the creation pack can be used to further personalize them.

I hope you enjoy, and I would love to hear about the witchy characters you create!

In order to download this game you must purchase it at or above the minimum price of $3 USD. You will get access to the following files:

Support this game at or above a special price point to receive something exclusive.

If you are unable to afford the cost of the game right now, please claim one of the available community copies!

Hi!! First of all, thank you so much for the game, it is absolutely delightful. I purchased it thanks to the Bundle for Ukrania and I've been obsesed ever since. However I have a tiny doubt, I am kind of lost in the gender part, page 3. Is it related to the vibes? Because I'm in love with my tiny witch with the gender of a bubbling cauldron but I don't know if I'm getting it right hehe

I'm so happy you love it! And yes, it's a way of describing gender if you just want it to be more your general vibes rather than a socially defined gender. Thank you for the comment! 💜

Thank you so much for the promptly answer 💜 And thanks for the explanations! Luckily one of my friends got the vibe you were giving us and we made a couple of awesome characters! I can't want to master a mini campaign with them <3

I'm so excited for you and that you're using this for the characters! If you ever want to share more, feel free! I love hearing about it.

I would love to tell you about them! Sadly I won't be sharing the drawings as they are not mine (although the artist has a Twitter/Instagram if you're interested!) BUT I can tell you about our babies!

My witch is called Oleander and is cozy as a bubbling cauldron, goes by they/them. They are gentle and sweet but were born during an eclipse, thus developing the curse of lycanthropy as their mother was bitten by a werewolf. They avoid using wolfsbane in any of their potions and spells and have a special trinket: a bundle of herbs to keep the curse on hold.

Another character is Cadence, a pretty bard, beautiful like distant notes floating on the breeze. She grew up in a tabern and has an INSANE talent for reading people. She also makes poisons that can known anyone unconscious and we believe that she's a spy, but with her we can never be sure.

Rosemary is another witch, a chaotic, raven-like spirit that made a bargain with a fae spirit that is now trying to avoid and carries a scythe passed down by their mentor with glowing wards of protection.

And lastly we have Harmony, he's a trans druid incredibly introverted that chooses to spend his time in the woods instead of socialising and kills every houseplant he touches. He's not getting better with that, but surprisingly he's incredibly adept at taking care of the woods. He has a flower crown with echoes from the past, but doesn't talk with anyone about it.

And these are our children for the moment! 💕

Wow, this is actually perfect. An old witch PC of mine is reentering into our D&D campaign, so this'll really help with fleshing her out some more. 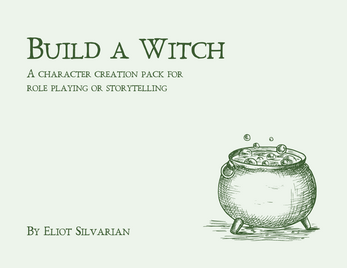 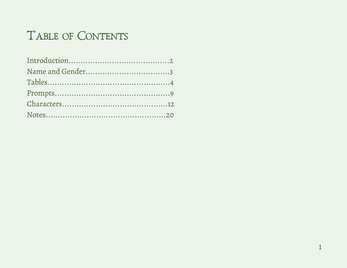 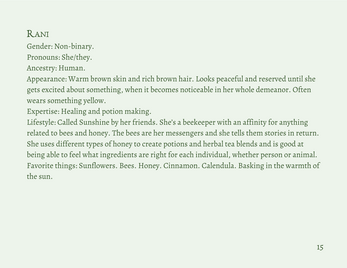